Wisconsin is known for cheese, beer, and Green Bay Packers. So, if you want to be close to the action, Green Bay is the city to move to. But you’re probably wondering what the city has apart from baseball. So, what’re the pros and cons of living in Green Bay?

Beyond the sports scene, there are other benefits associated with living in Green Bay. These are affordability of living and accommodation, a strong economy, and entertainment options. But Green Bay isn’t all perks. There are negatives such as violent crimes, winters, and low quality of education.

Regardless of the negatives, this snowy city could just be right for you. It’s all about whether it suits your lifestyle or not. This article discusses the pros and cons of living in Green Bay.

Pros of Living in Green Bay

When choosing a city to live in, it’s always essential to go for one where you can get the best things of life while spending the least money. Green Bay is one of those places where this is possible. The cost of living in the city is 17.7% lower than the national average of 100. So, you’ll be spending significantly less to live in this city than you’d spend in many other cities in the US. Green Bay is one of the most affordable cities of its size in the US.

Residents of Green Bay enjoy a significant discount when it comes to housing. It’s one of the major reasons for the low cost of living in the city. While homeownership isn’t something that residents of most big cities get into, it’s very prevalent in Green Bay. Only about 30.3% of residents here are renters, which means the rest are homeowners. This isn’t surprising because the average home value is $181,988, far below the national average.

If you’re planning to buy a house, Green Bay is ideal for you. You’re unlikely to find many places where prices are low like this. However, even if you plan to rent, the prices are still very Favourable. The average rent is $715.

Green Bay offers residents lots of economic opportunities that might be difficult to find anywhere else in Wisconsin. The city is truly blue-collar with an unemployment rate of 4.2% for July 2021, way lower than the US employment rate. There are opportunities in various industries such as manufacturing, retail, healthcare, etc.

But for all its positive economic outlook, the wages aren’t that encouraging. The median household income is $49,251, which is substantially below the US average. This low income might explain why everything is cheap in the city. However, the median income for the Green Bay metropolitan area is much higher at above $65,000.

For non-residents, Green Bay’s claim to fame is its football team. But this is only the tip of an iceberg. The city has lots of entertainment options for its residents. You only need to make your choice between indoors and outdoors and you’ll find that this city has enough to satisfy you.

There are several parks for outdoor activities in Green Bay. However, if you’d rather spend time indoors, the cinemas, museums, and several other local sites are great spots to visit.

Several entertainment options in the city are also kid-friendly. For example, the Green Bay Children’s Museum and National Railroad Museum are family-friendly places where your kids will enjoy themselves to the fullest.

Cons of Living in Green Bay

Just as Green Bay has several good reasons to live there, it also has reasons to make you think twice about your decision. The downsides include

This city is one of those places in the Midwest where crime is more prevalent than you’d imagine. Even though the total crime rates and property crimes are below the US average by 14% and 22%, respectively, crime is still a problem.

The quality of education in Green Bay leaves much to be desired. While there are great schools in the city, the overall data shows that the city faces low test schools, concerns about the safety of schools, and a terrible graduation rate. The primary reason for this situation is the underfunding of schools in the area. Green Bay spends less on students than the average amount per student in the US.

According to AreaVibes, the average test scores are 26% below the country’s average, while those with bachelor’s degrees are only 24.1%. This shows that education isn’t given priority in Green Bay. However, you’ll still find a few good schools in the area, but overall, the school system is below average.

Wisconsin is famous for snowy weather, and here in Green Bay, you’ll have a taste of that notorious winter. The breeze can even make winters much colder in the city due to the location beside the Bay. Arctic blasts are very common here, and the temperature can go as low as turning negative. So, if you’re familiar with warm and sunny weather, you might struggle to adapt to this city. The snow here is heavy, which means you’ll be doing a lot of shoveling. No wonder the weather comfort index places it at 6.5/10, below the US average of 7/10.

Living in Green Bay isn’t for everyone. Even though the city has several livability qualities, its downsides are big enough to discourage anyone. But if you can see past that, you’ll love the city. 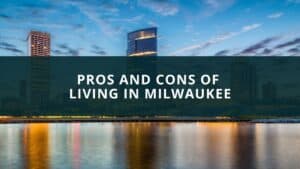